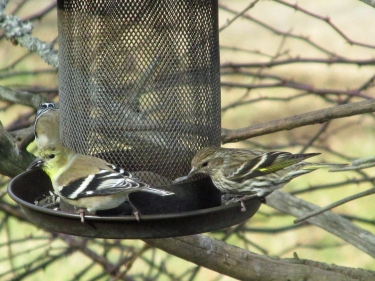 Winters, despite the depressed variety of bird species, can bring excitement when flocks of “irruptive” finches not often seen in the area expand their range into the region.

The 2014-15 winter season is shaping up as a notable invasive year for pine siskins, another species of the so-called Northern finches. This small finch is related to and similar in appearance to the American goldfinch.

Bristol birder Richard Lewis reported on bristol-birds, an online forum for sharing area bird sightings, that he observed a large flock of more than 100 pine siskins along Caverns Road in Sullivan County about a half mile west of Bristol Caverns. Ron Carrico counted 58 Pine Siskins coming to his feeders on Jan. 23 at his home in Bristol, Tennessee. 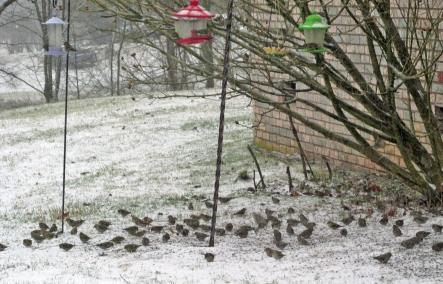 They’re not the only people in Northeast Tennessee and Southwest Virginia reporting large numbers of pine siskins this winter. Siskins have been visiting my feeders since this past October, but their numbers began to increase in December. Since then, a flock of about 70 birds, accompanied by lesser numbers of American goldfinches, has become daily visitors at the feeders, enjoying mostly sunflower and nyjer thistle seeds.

Siskins are not the only bird to stage irruptions. In addition to pine siskin, the website birdsource.org identifies pine grosbeak, red crossbill, white-winged crossbill, purple finch, common redpoll and evening grosbeak as the birds typically associated with these winter incursions. The website also notes that finches are not the only birds known for these periodic irruptions. Other non-finch species — red-breasted nuthatch, Clark’s nutcracker, bohemian waxwing, black-capped chickadee and varied thrush — undertake periodic winter irruptions. Two of these northern finches — the pine siskin and the red crossbill — are sporadic summer residents on some of the higher mountains in the region. 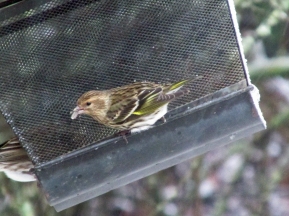 These irruptions are not usually motived by cold or severe weather. The absence of a favored food source on a bird’s normal winter range is usually a trigger for an irruption. Birds, such as pine siskins, will fly farther than normal in a quest for reliable food sources. Not surprisingly, well-stocked feeders often attract their attention.

The pine siskin belongs to a genus of birds known as Spinus, which includes three species of goldfinches and more than a dozen species of siskins, many of them native to Central and South America. Only one species — the Eurasian siskin — is found outside of the New World. Other siskins include the black-capped siskin, hooded siskin, red siskin, black siskin, Antillean siskin and Andean siskin. 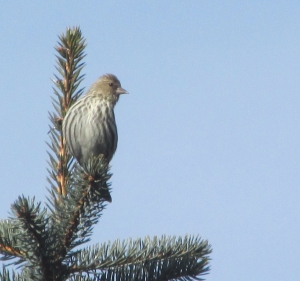 Siskins often associate with American goldfinches. In shape and size, the two birds are extremely similar. Unlike goldfinches, however, siskins display extensive streaking on their back and breast. The bill of a siskin is sharp and pointed. Overall a drab brown in coloration, siskins also show some surprisingly bright yellow coloration in their wings and tails. Although sociable, individuals can display some irritable tantrums when competing for prime space at feeders.

Some people quickly discover that a large flock of pine siskins is quite a drain on the daily allotment of feed provided for backyard birds. For such small birds, they have large appetites. Siskins are also extremely tame and can often be approached quite closely. A few years ago during a particularly frigid cold snap, I succeeded in luring a pine siskin to land on my gloved hand, which held some sunflower seeds. Needless to say, it was a very memorable, intimate moment.

In addition to this unusual tameness, siskins are extremely vocal birds. These birds have a shrill trill that sounds almost mechanical to my ears. Large flocks also produce a constant twittering noise as they perch in trees or on feeders.

1 thought on “Pine siskins abundant throughout region this winter”