I felt really bad for the birds when one of the larger blue spruce trees in the yard came crashing to the ground on Thursday, Feb. 12. At the same time, I felt fortunate that the tree collapsed while I was at work, mainly because it came to rest at a location where I usually park my automobile.

The large tree, which still retained a dense growth of stiff, prickly needles on the upper third of its branches, snapped right at ground level. With the horizontal shelter normally provided by the tree suddenly gone vertical, many of the birds looked dazed and confused in the aftermath. In particular, some of the Carolina Chickadees looked somewhat bewildered and baffled. A couple of Pine Siskins looked as if they were confused by the situation. 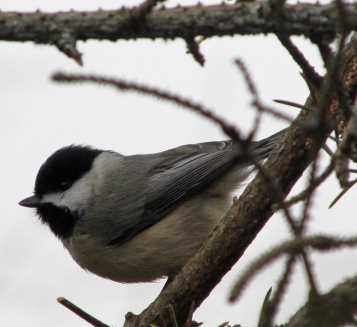 Most of the birds have adjusted. In fact, they have found the branches of the fallen tree just as capable of offering shelter from the elements and hiding places from potential predators.

The blue spruce was one of five planted by my late father and my late grandfather more than 30 years ago. Two of those five trees are still standing, but two others had already fallen several years ago during storms.

The gusts of wind on Feb. 12 proved too much for the tree. I don’t think blue spruce are particularly suited to life here in northeast Tennessee. They seem more vulnerable to pests and disease than many other conifers. At one time, my father planted some on his Christmas tree farm back in the 1980s and early 1990s. Most people didn’t like the sharp, spiky needles of a blue spruce, although the blue-green coloration often brought admiration from observers.

Until they grew more than 12 feet tall, my grandfather used to decorate the two spruces on each side of his home. He would string multi-colored strands of Christmas lights through the branches of the trees every holiday season. 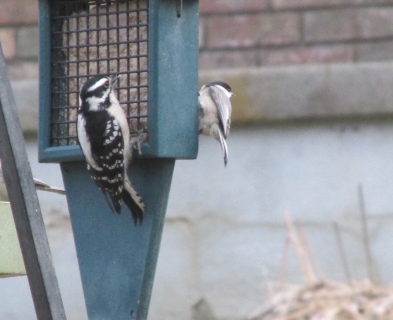 When the trees grew too big to decorate, the birds became the chief beneficiaries. I positioned many of my feeders in the lower branches of several of the remaining spruces. From nuthatches and woodpeckers to chickadees and titmice, a variety of birds liked to congregate within the tree’s branches. A host of other birds, including Eastern Towhees, Dark-eyed Juncos and White-throated Sparrows liked to feed on the ground beneath the tall trees.

In the summer, birds such as Song Sparrows and Northern Cardinals concealed their nests in the thick boughs of some of these blue spruces.

I hate to lose a good tree. With these spruces, there are many memories tied to them. I’ll get over the loss, and I hope that, once the shock wears off, so will the birds.

After all, if your home came crashing down without warning, you might be a little perplexed, too.

I’ve been counting since Friday, Feb. 13, when this year’s GBBC kicked off. I’ll be sharing more about my participation in upcoming posts.

To learn more about birds and other topics from the natural world, friend me on Facebook at https://www.facebook.com/ahoodedwarbler. I’m always posting about local birds, wildlife, flowers, insects and much more. If you have a question, wish to make a comment or share a sighting, email ahoodedwarbler@aol.com.