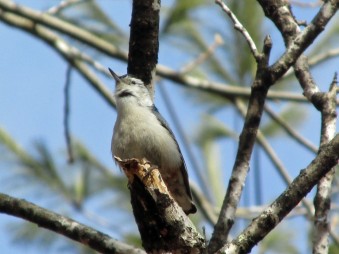 The power of flight gives most birds a perfectly valid reason to disregard the power of gravity. The family of tree-clinging birds known as nuthatches lives an even more topsy-turvy lifestyle than many other of their winged kin. Nuthatches prefer a headfirst stance as they search for food in the nooks and crannies in tree trunks and branches.

The United States is home to four species of nuthatches: white-breasted, red-breasted, brown-headed and pygmy. White-breasted nuthatches are probably the most familiar nuthatch to backyard birders in this area. 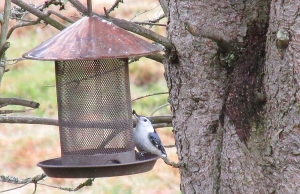 Because of their gravity-defying antics, the white-breasted nuthatch and other members of the family can provide hours of entertainment at our bird feeders. Individual white-breasted nuthatches will follow a single-minded path along the trunk of a tree or a branch on the way to a feeder. An individual nuthatch rarely varies from this path. It’s amusing to watch the jerky progress along the trunk as this bird prepares for a flight to a feeder holding sunflower seeds or a hanging wire basket of suet.

At my home, nuthatches typically remain aloof from the rivalry always ongoing between the chickadees and titmice. The white-breasted nuthatch is also a no-nonsense visitor. Rarely distracted by disturbances among other birds, this nuthatch is content to grab a seed and go or hang on to the wire frame of a suet basket and peck off chunks of suet. 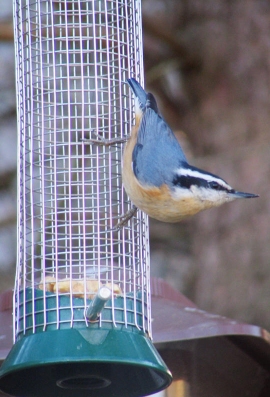 The more numerous titmice and chickadees give way when a white-breasted nuthatch claims a feeder. At times, however, among the frantic activity, a tufted titmouse or a Carolina chickadee will forget itself and fly to a position on a feeder already claimed by a nuthatch. If surprised enough to retreat to a nearby perch, the nuthatch will go through a rather comical little dance to express its displeasure. Wings spread out in a rigid pose, the bird will turn around in tight circles, showing definite resentment at being displaced by an offending chickadee or titmouse.

These displays are usually brief, unless they are directed toward another white-breasted nuthatch. A male-female pair of these nuthatches can peaceably visit a feeding area at the same time. Two male nuthatches — or two female nuthatches for that matter — show little toleration for each other. Their little dances of defiance are in these cases demonstrated for each other. Eventually, one nuthatch will give way, but these are stubborn birds, much more set in their ways than chickadees and titmice. 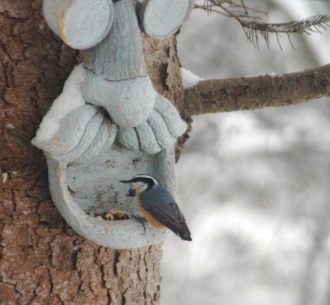 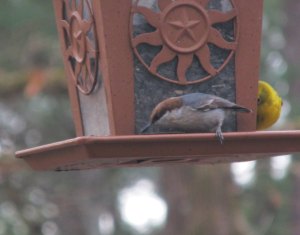 Both of these nuthatches can be attracted to feeders by offering peanuts, sunflower seeds and suet. They are also cavity-nesting birds, but are more reluctant about accepting a nesting box as a place to rear young. They will gladly accept an old woodpecker hole or other natural cavity in a tree.

The brown-headed nuthatch is a specialist of pine woodlands throughout the southeastern United States, favoring loblolly-shortleaf pines and longleaf-slash pines. This nuthatch requires standing dead trees for nesting and roosting. They forage for food, however, on live pines. The birds are more abundant in older pine stands. 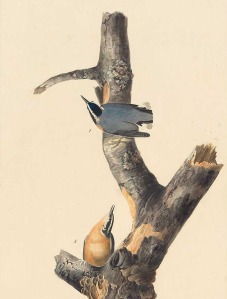 This small nuthatch is not at all common in the region, but there are some records. I’ve had much better luck finding the brown-headed nuthatch during visits to coastal South Carolina or suburban Atlanta in Georgia. In these southern locations, it can be a quite common bird.

These small birds will occasionally forage close to the ground, but they are often in the upper branches of pine trees. Their presence is often revealed by their call, which sounds amazingly like a squeeze toy. They produce their “squeaky toy” call persistently when agitated or curious. Brown-headed nuthatches often associate with mixed flocks in company with Carolina chickadees, tufted titmice, pine warblers and other small songbirds.

I also want to complete my list of North American nuthatches by adding the fourth species — pygmy nuthatch — to my life list. I have made two trips to western North America, where this species ranges, but haven’t managed to find this bird. Both the pygmy and brown-headed are among the smallest members of the nuthatch family.

On the other end of the size scale is the appropriately named giant nuthatch, which reaches a length of almost eight inches. The giant nuthatch ranges through China, Thailand and Burma. This nuthatch is bigger than a downy woodpecker, one of our more common visitors at backyard feeders in our region.

Worldwide, there are about 25 species of nuthatches, some of which have surprisingly descriptive names for birds that spend most of their lives creeping in obscurity along the trunks and branches of trees. Some of the more creative common names for these little birds include beautiful nuthatch, velvet-fronted nuthatch, sulphur-billed nuthatch, chestnut-bellied nuthatch, snowy-browed nuthatch and chestnut-vented nuthatch.
These birds are named “nuthatch” for the habit of some species to wedge a large seed in a crack and hack at it with their strong bills. I like to refer to them as “upside-down birds” because gravity doesn’t seem much of a factor in their daily lives. They are content to walk headfirst down a tree trunk or probe the underside of a large branch. It must give them an interesting perspective on the world around them. 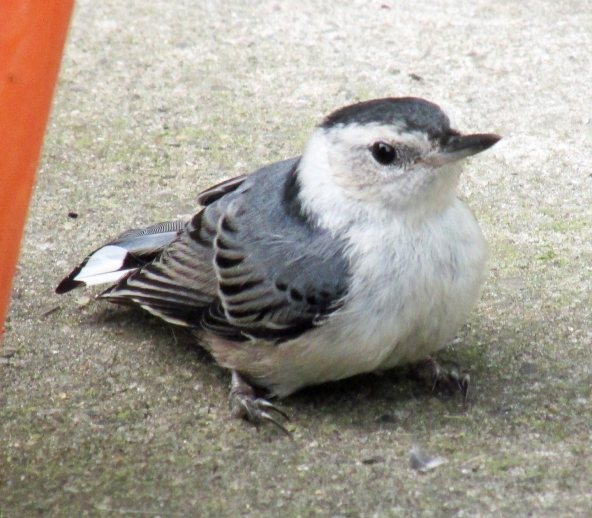 2 thoughts on “Meet the gravity-defying nuthatches”