A blue-gray gnatcatchers finally put in a first spring appearance at my home on April 11. Most likely, these tiny birds had already arrived, but my schedule hadn’t yet allowed me a glimpse of this punctual songbird. Back in March, I saw and heard dozens of them during a trip to the South Carolina Low Country. 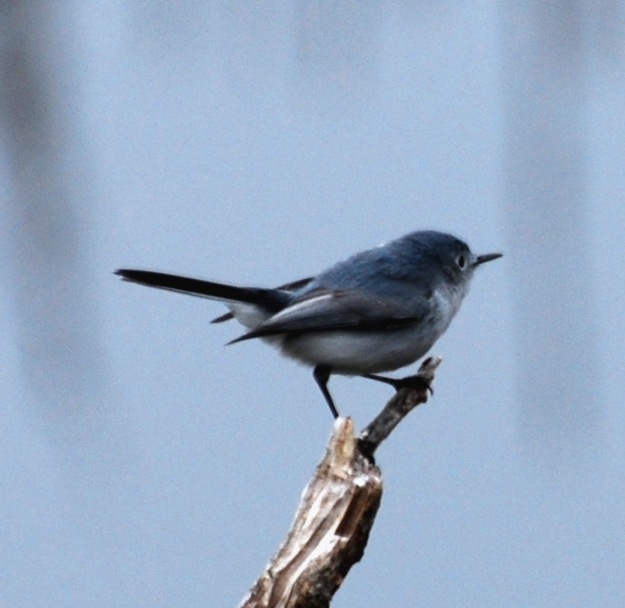 Birds are as dependable as clocks and calendars when it comes to noting the passage of time. I can keep track of the changing seasons based on the composition of the birds in my yard. The gnatcatcher has long been my signal to the start of the frenzied pace of spring migration for many of the birds returning to the region after sojourns much farther south. For example, the first gnatcatcher arrived in my yard in 2014 on April 4. Two days earlier, I had observed my first blue-grey gnatcatcher of the spring while visiting Winged Deer Park in Johnson City, Tennessee. It doesn’t hurt that the arrival of gnatcatchers coincides with the annual blooming of bluebells, a wildflower for which this local park is famous.

The blue-gray gnatcatcher is a tiny, active bird with noisy habits that make it fairly easy to detect in early spring before foliage has grown dense in the branches of trees. This gnatcatcher ranks with the kinglets and hummingbirds as one of the smallest birds to range within the United States. This tiny bird tips the scales at only a fourth of an ounce. A gnatcatcher is an incredible bundle of feathered energy, seemingly always on the move as it snatches small winged insects out of the air or plucks other prey items from leaves or branches. Gnatcatchers are also quite curious birds that, more than once, have given me the distinct impression that I am the one being observed while watching their antics.

So, as the name suggests, do gnatcatchers truly eat gnats? The website All About Birds contends that, despite its name, the gnatcatcher does not concentrate its feeding efforts on gnats. This tiny bird does, however, prey on a variety of small insects and spiders. Winged insects, such as small flies and gnats, are part of the menu for a gnatcatcher, but this bird is also capable of plucking spiders from their webs or snatching tiny caterpillars from the underside of leaves.

The blue-gray gnatcatcher builds an exquisite and compact nest using such materials as spider silk and lichens. I have found many nests over the years by listening for the scolding notes of the parents which, even near their nest, have not learned the virtue of silence. The blue-gray gnatcatcher is one of the birds that, in my mind, truly kicks off the arrival season of many of my favorite neotropical migrants. With the arrival of gnatcatchers, I can now expect to enjoy the arrival of birds like hummingbirds, warblers, tanagers, vireos, thrushes, and grosbeaks.

Bryan Stevens lives near Roan Mountain, Tennessee. To learn more about birds and other topics from the natural world, friend Stevens on Facebook at https://www.facebook.com/ahoodedwarbler. He is always posting about local birds, wildlife, flowers, insects and much more.