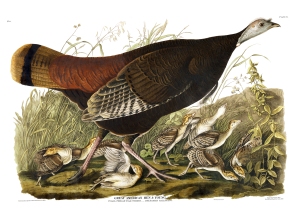 When the Pilgrims sat down to the first Thanksgiving feast in the New World, many of the trappings we associate with the November holiday were missing from the menu. Instead the Pilgrims enjoyed a repast of bounty that was seasonally available when they held that first celebration back in 1621. The Pilgrim leader William Bradford wrote of that first observance in his work titled “Of Plymouth Plantation.” Some of the details may surprise you.

When Americans sit down in a few days to celebrate Thanksgiving, plenty of us will enjoy a meal of turkey with all the traditional trimmings. Among the items available for that first feast were a variety of fish, including good New England cod, as well as bass and other fish. The Pilgrims took “good store” of fish and “every family had their portion.” Bradford also wrote that as winter approached, Massachusetts Bay suddenly experienced an abundance of waterfowl, but that their numbers eventually decreased. Birders will recognize what was happening with this sudden influx of ducks and other waterfowl. They were migrating. The waterfowl were temporarily abundant, but then as the ducks and other birds continued to make their way south, they became scarce again.

The early settlers in Massachusetts took advantage of abundant resources, including fish such as cod (pictured) and bass. Wild turkeys were also abundant.

The Pilgrims also enjoyed Indian corn, as well as the wild fowl that is still very popular at traditional Thanksgiving meals today. They may have lacked cranberries and potatoes, but they most definitely feasted on turkey. “And besides waterfowl,” Bradford wrote, “there was great store of wild turkeys, of which they took many, besides venison.”

So, cod and venison shared top billing with turkey at that early Thanksgiving. Of course, Bradford was writing about North America’s wild turkey, which is a far cry from the domesticated fowl that typically ends up on serving platters on Thanksgiving Day in our age 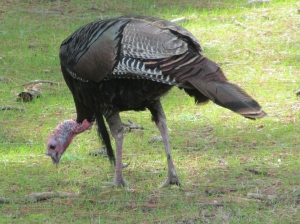 Surprisingly, the wild turkey, which was so abundant during the Pilgrim era in Massachusetts, almost didn’t survive until the 19th century. It’s almost miraculous that the wild turkey didn’t join the unfortunate ranks of such extinct birds as the passenger pigeon and Carolina parakeet. In fact, only an estimated 30,000 Wild Turkeys were alive about 1930. The same forces that wiped out the immense flocks of passenger pigeons and migrating Eskimo curlews almost drove the wild turkey to extinction. Habitat destruction and a merciless commercial slaughter almost claimed another uniquely American bird. 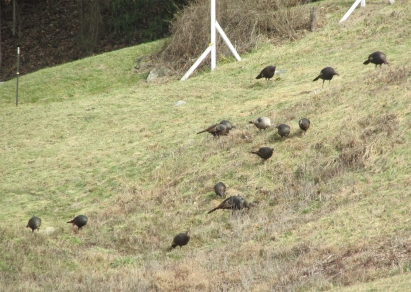 Ironically, the wild turkey’s valued status as a gamebird (the largest in North America) helped persuade many Americans to fight for its conservation. It’s an effort that succeeded admirably. Today, there are almost seven million wild turkeys roaming North America. The wild turkey is now abundant enough to be legally hunted in most states, including Tennessee, Virginia and North Carolina. The turkey is once again common across the continent, including in Massachusetts.
The wild turkey is a large bird of mostly a terrestrial lifestyle. Males, or tom turkeys, can reach a length of 46 inches, weigh between 11 and 24 pounds and boast a wingspan of 60 inches. Females, or hens, are typically much smaller and weigh between 5 to 12 pounds. The wild turkey is perfectly capable of flying at speeds up to 55 miles per hour, but they often prefer to walk and run over the ground. They’re good sprinters, in fact, and can reach a running speed of 25 miles per hour.

The female turkey, or hen, nests, incubates eggs and rears young without any help from her mate. The hen may lay as many as a dozen eggs. The clutch usually hatches within a month. Newly-hatched turkeys are known as poults. The poults are capable of finding their own food after leaving the nest, which they do within 12 hours of hatching. They are supervised, however, by the hen. Wild turkeys require a mixture of woodlands with clearings and fields to thrive. They roost in trees at night, but feed in more open habitats. 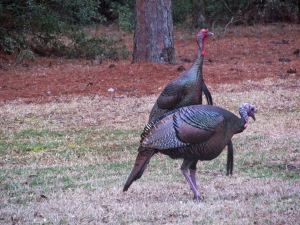 Few birds have featured so prominently in the history of the United States as the wild turkey. In fact, the turkey came close to being named the official bird of the United States. Benjamin Franklin, who proposed the turkey as the official United States bird, was dismayed when the bald eagle was chosen over the turkey. Franklin wrote to his daughter, referring to the eagle’s “bad moral character,” saying, “I wish the Bald Eagle had not been chosen as the Representative of our country! The turkey is a much more respectable bird, and withal a true original native of America.” George Washington, the nation’s first president, also shared Franklin’s opinion, and pointed out the Bald Eagle’s lifestyle as a carrion eater. 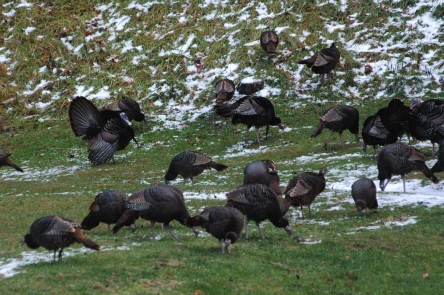 While their objections are duly noted, perhaps it’s just as well that Americans don’t have an official national bird that’s also served up at holiday meals in households throughout the nation. If not as our national symbol, the wild turkey is still deserving of respect. This bird, found only in North America, is a true American success story.