People who feed the birds soon get to know the feisty personalities from the retiring wallflowers when it comes to the visitors to their yards. Northern mockingbirds, male ruby-throated hummingbirds and American robins are usually counted among the more boisterous birds.

Then there are the birds that shrink from interaction and hang back on the fringes, including wood thrushes, Eastern towhees and the large but shy pileated woodpecker. The latter example just goes to show that size doesn’t always equate with an extroverted personality when it comes to birds. 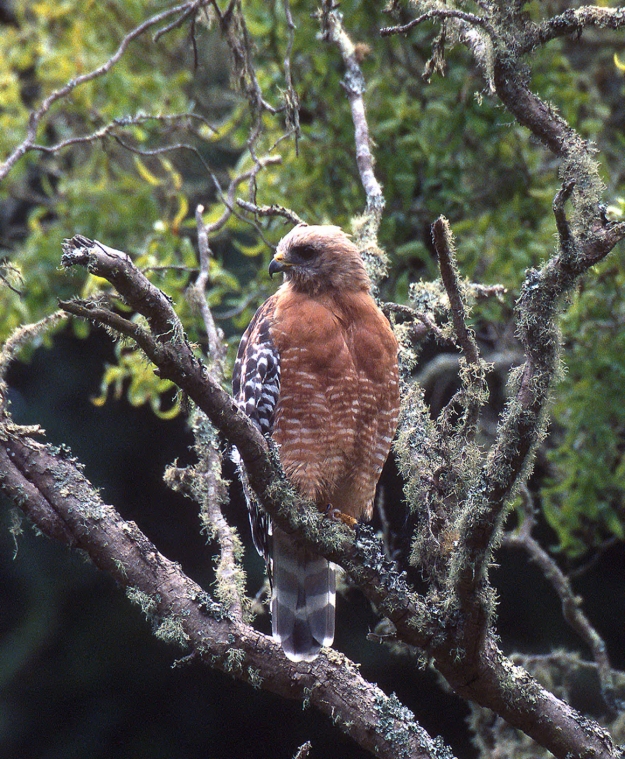 Photo by U.S. Fish and Wildlife Service/Lee Karney • Red-shouldered hawks prefer to perch and ambush prey. They drop on unsuspecting prey, which varies from reptiles and amphibians to rodents, that come within reach.

That’s certainly the case with a red-shouldered hawk that has taken up residence for the winter at my home. The hawk usually favors a stand of trees near the fish pond at my home when it visits the yard. The hawk made its initial appearances in December and then lingered into the new year. So far, the hawk has been a very shy guest. I’ve wanted to photograph the bird, but that’s difficult to do when it spooks and flies off the instant I step outside the door of my home. I’m not too disappointed because I know that raptors that are too comfortable around humans are at risk of running afoul of misinformed individuals who may regard all predatory birds as “bad.” The reality is that all hawks are valuable components of a healthy, working ecosystem with each species filling a certain niche.

According to a factsheet published by the New York State Department of Environmental Conservation, this raptor breeds in moist woodlands, riverine forests, the borders of swamps, open pine woods and similar habitats. Nesting almost always occurs near water, such as a swamp, river or pond. 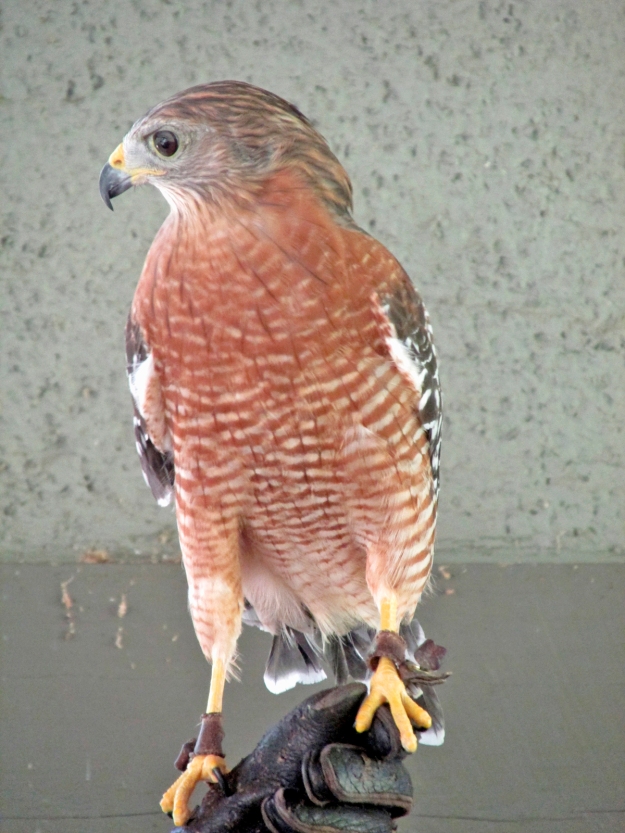 Photo by Bryan Stevens • This captive red-shouldered hawk was rehabilitated after suffering an injury and now works in an educational program at Brookgreen Gardens in South Carolina to teach the public about raptors, other birds, and various types of wildlife.

The red-shouldered hawk is an ambush predator. This raptor usually selects a favorable perch and remains still while scanning for possible prey. The hawk will drop rapidly onto any prey that wanders carelessly within range. In the summer, prey items largely consist of reptiles and amphibians, including snakes and frogs, as well as some insects and crayfish. Most of these creatures are scarce during the colder months of the year, which prompts these hawks to adopt a diet that focuses on rodents and the occasional songbird. Other than the altercations with the resident crows, I haven’t observed any encounters between the hawk at my home and any other birds — with one exception.

On a recent morning, the hawk was on its usual perch — a branch of a large willow adjacent to the fish pond — when seven Canada geese, another rare visitor to my home, suffered some sort of fright and took flight. The noisy geese flew directly over the willow, which spooked the raptor into taking flight in the opposite direction of the departing geese. 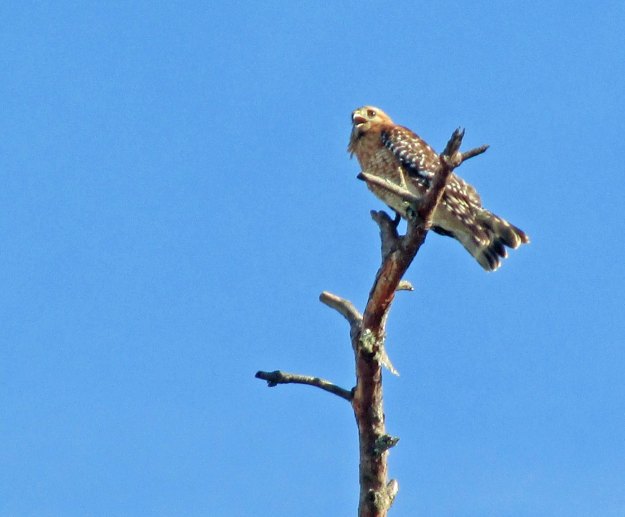 Photo by Bryan Stevens • A calling red-shouldered hawk perched in a dead tree on Pawleys Island in South Carolina.

The red-shouldered hawk produces a distinctive, piercing whistle that reminds me of the shrill call of a killdeer. The hawk at my house has been silent so far, perhaps not wishing to draw attention. The few times the local crows have noticed the hawk’s presence, they’ve flocked together to mob the unfortunate hawk. It’s also not the right time of year. During courtship and the subsequent nesting period, these hawks are vocal. At other times of the year, they are rarely heard. It’s also possible to mistakenly think you have heard one of these large hawks. Blue jays have apparently learned to imitate the “kee-yar” call of this hawk, often working a flawless rendition of the whistled notes of this large raptor.

In contrast to the related red-tailed hawk, the red-shouldered hawk soars less and prefers to perch hidden in the cover of trees. This hawk’s name comes from the reddish-brown shoulder patches in the bird’s wings. Adults show a tail marked with vivid bands of black and white that is quite distinctive. 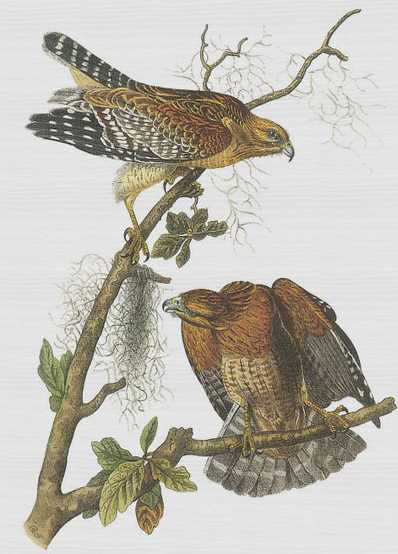 The red-shouldered hawk is less common in the region than some of the other raptors. This hawk’s stronghold is in Florida and other southern states like South Carolina and Georgia. I’ve seen many of these hawks on visits to both the Sunshine State and Palmetto State.

Some of the buteo species have adapted to life on islands, including the Galapagos hawk and the Hawaiian hawk. Some of these hawks have quite descriptive names, including the white-throated hawk, gray-lined hawk, zone-tailed hawk and short-tailed hawk. Outside the United States, raptors in the buteo genus are often known as buzzards. When the first European colonists came to the New World, they applied the term buzzard to both native vultures, as well as the large raptors like Swainson’s hawk and broad-winged hawk that reminded them of the ones back in Europe.

It’s been nice hosting this beautiful raptor, although the crows might disagree with me. A neighbor who lives close to me has had red-shouldered hawks spend the summer months on her property, so I’m hopeful that my visitor might even like the surroundings well enough to become a full-time resident.

Bryan Stevens lives near Roan Mountain, Tennessee. To learn more about birds and other topics from the natural world, friend him on Facebook at https://www.facebook.com/ahoodedwarbler. If you have a question, wish to make a comment or share a sighting, email ahoodedwarbler@aol.com. 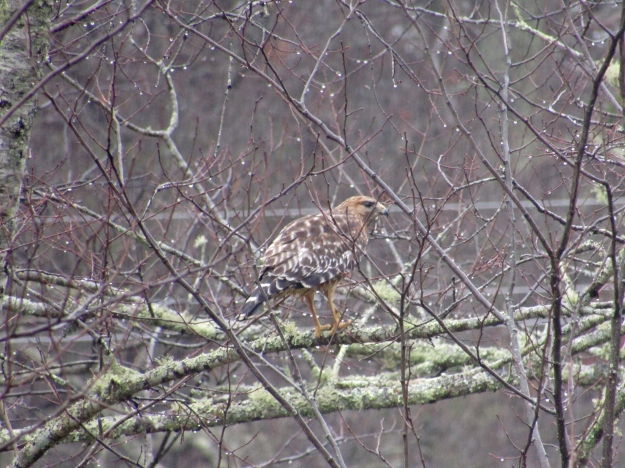 Photo by Bryan Stevens • In a timely fashion, this red-shouldered hawk, which has avoided the camera for weeks, arrived on this rainy day in late January on the same date this post inspired by this bird was published.