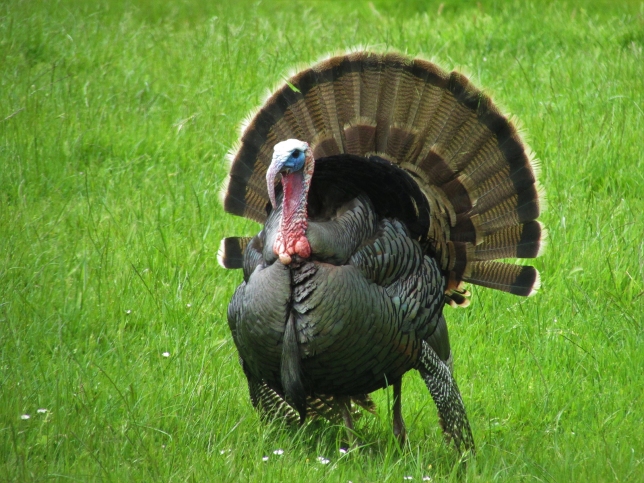 Photo by Avia5/Pixabay.com • A male wild turkey, often referred to as a “tom” or a “gobbler,” fans his tail in a display meant to impress hens and intimidate other males.

Celebrated in William Bradford’s written account of the First Thanksgiving in 1621, the wild turkey had all but vanished from Massachusetts and the rest of New England a mere two centuries later. By the time of Henry David Thoreau, who is arguably America’s first environmentalist, the noted author lamented in 1856 that the turkey and other wildlife were difficult to find in his native Massachusetts.

In a journal entry from the spring of 1856, Thoreau decried the part the descendants of those Pilgrims who celebrated the first Thanksgiving more than 200 years earlier had played in the decimation.

“When I consider that the nobler animals have been exterminated here — the cougar, the panther, lynx, wolverine, wolf, bear, moose, dear, the beaver, the turkey and so forth and so forth, I cannot but feel as if I lived in a tamed and, as it were, emasculated country,” Thoreau wrote in his journal. “Is it not a maimed and imperfect nature I am conversing with?”

Perhaps, but Thoreau would probably be encouraged that many of the animals he mentioned in his journal have now recovered and once again roam throughout New England. The wild turkey has been in the vanguard of that resurgence. In fact, the revival of the wild turkey’s fortunes in New England has had unintended consequences. In short, this venerable fowl has run amok in some parts of its former stronghold.

An article by Brianna Abbott for the Audubon Society’s website estimates that before Europeans first colonized New England in the 1600s, as many as 10 million wild turkeys roamed from Maine to Florida to the Rocky Mountains of the American West.

Today, wild turkeys are back with a vengeance. Turkeys may have grievances, it turns out, for the persecution they suffered at the hands of Americans for the past few centuries. Touted as a major restoration success story, the wild turkey began to be reintroduced to New England about half a century ago.

Now that they’re back, turkeys are part of a dramatically changed landscape. Suburbs now stretch in wide swaths of terrain that once supported forests and associated wildlife. Luckily — for the turkey, anyway — it is a very adaptable bird. Turkeys have taken to life in the suburbs with such enthusiasm that they are now a wildlife management issue for the human residents who must share living space with them. Emboldened problem turkeys chase and intimidate women and small children, as well as pets. Whole flocks have gone rogue. 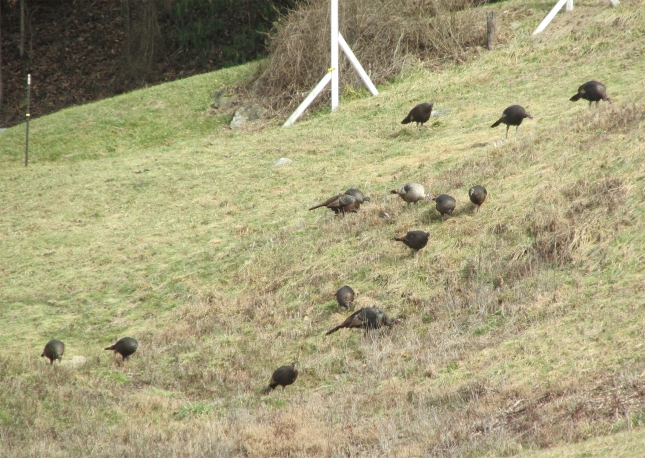 Photo by Bryan Stevens • Wild turkeys forage on a hillside.

Gone are the turkey’s natural predators — lynxes, cougars and wolves — that had kept America’s premier game bird’s population in balance. As Thoreau pointed out, nature is no longer perfect. More than 170,000 wild turkeys now live in New England and they’re not always at peace with their human neighbors.

Thoreau didn’t have the benefit of environmental science to back him up, but he would probably not be surprised that a “maimed” nature is causing some unexpected problems even as some of the animals he so sorely missed are returning to their former haunts.

The Tennessee Watchable Wildlife Website notes that the wild turkey was once nearly eliminated from the Volunteer State. By the early 1900s, over-hunting eliminated this species from most of its range, including much of Tennessee. Modern wildlife management has reestablished this bird throughout its historic range and into 49 of the 50 United States. 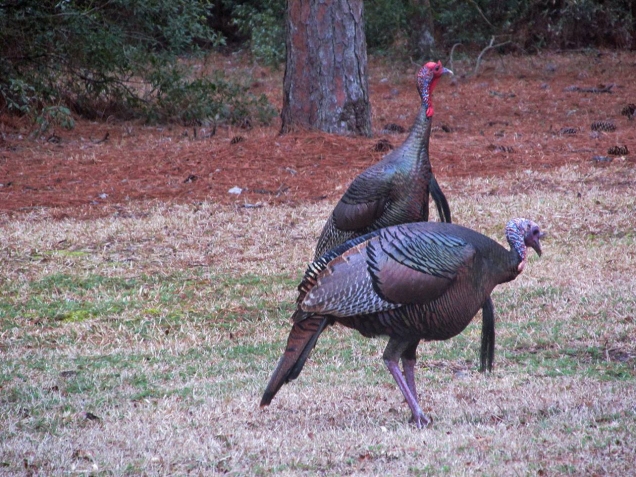 Photo by Bryan Stevens • Wild turkeys have re-established themselves in many areas across the United States, including New England.

According to the website, the natural habitat for the wild turkey consists of mature woodlands with scattered openings or fields. In such areas, turkeys can forage for food such as acorns and other wild nuts, seeds, fruits, insects, buds, fern fronds and even the occasional salamander.

Wild turkeys roam the woods around my home, and I know of other areas that are dependable locations for observing these birds. While their numbers are increasing, the wild turkey has not yet turned the tables. For the foreseeable future, I suspect Americans will continue to dine on turkey every Thanksgiving, and not the other way around.

Who could blame them, however, if turkeys were to feel perfectly justified in biting back at the American public? We’ve not always been the best stewards for our native wildlife. Call me an optimist. I believe turkeys and people can co-exist. As residents in New England have learned, we just have to be prepared for some give and take.

Photo by Bryan Stevens • A male gobbler seeks the attention of hens, as all these Wild Turkeys add to the number of this species found during the count.