The arrival of Ruby-throated Hummingbirds is imminent in the region. If a few of these tiny birds haven’t already found their way into Northeast Tennessee, they almost certainly will have made a first spring appearance within the next week. They invariably arrive in the first week or so of April and have already been spotted in other parts of Tennessee. 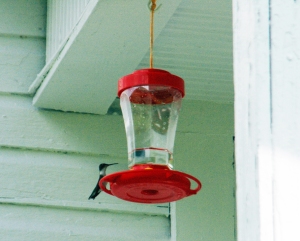 Photo by Bryan Stevens
Ruby-throated Hummingbirds should be returning to the region within the next few days.

As always, I enjoy hearing from readers about the date and time when they see their first hummingbird of spring. Share your sighting in a comment on this blog, contact me on Facebook, send me an email at ahoodedwarbler@aol.com or call me at 423-725-2666. I have my feeders filled with sugar water and am waiting eagerly for the arrival of that first Ruby-throated Hummingbird of 2014. I’ll report in upcoming posts about the arrival dates of hummingbirds that readers share with me.

New birds continue to arrive at home. For a second year in a row, Chipping Sparrows made their first appearance on the last day of March. Their timing could not have been better. Since I started birding in 1993, Chipping Sparrows have returned reliably from mid-March to early April. I watched recently as two Chipping Sparrows searched for dandelion seeds and other food along the edge of the gravel driveway. They also visited the feeders. They also found elevated perches to deliver their trilling song, which is similar to the songs of Pine Warblers. This can be confusing since the two species often frequent the same habitats. 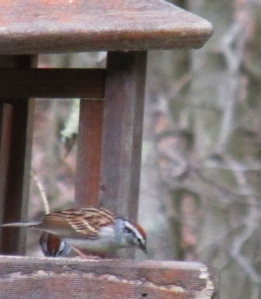 Photo by Bryan Stevens
Chipping Sparrows are returning to feeders across the region.

Their loud, trilling songs are one of the most common sounds of spring woodlands and suburbs. Experts believe that Chipping Sparrows evolved as birds that lived on the edge of coniferous forests. However, as human progress changed the landscape, they adapted and became associated with open habitats, including farmland and pastures.

Many birders refer to this small sparrow by the affectionate nickname, “Chippie.”

I’ve also learned that a pair of Eastern Bluebirds have been busy constructing a nest in one of two boxes located at my fish pond.

Photo by Bryan Stevens
A female Eastern Bluebird is shown with a beakful of pine needles gathered for nest construction.

The bluebirds now have some competition. A pair of Tree Swallows put in their first appearance of the year at my home on April 1. They were a few days early, having made their first 2013 appearance on April 4.

They immediately began checking out their favorite nesting box next to the fish pond. Their interest put them into conflict with some other Eastern Bluebirds, which recently started showing an interest in that same box.

On April 2, I saw my first Blue-grey Gnatcatcher of the spring while visiting Winged Deer Park in Johnson City. While at the park, I also enjoyed observing a variety of spring wildflowers, including the bluebells for which this local park is famous.

Two days later, I saw my first spring Blue-gray Gnatcatcher at home on Simerly Creek Road in Hampton. This bird is a few days later than expected, but it may have been here all along and I just failed to detect it.

Like Chipping Sparrows, the Blue-Gray Gnatcatchers reliably return every year in the final days of March and first days of April.

The Blue-gray Gnatcatcher is a tiny, active bird with noisy habits that make it fairly easy to detect in early spring before foliage has grown dense in the branches of trees.

This gnatcatcher ranks with the kinglets and hummingbirds as one of the smallest birds to range within the United States. This tiny bird tips the scales at only a fourth of an ounce. A gnatcatcher is an incredible bundle of feathered energy, seemingly always on the move as they snatch small winged insects out of the air or pluck other prey items from leaves or branches. They’re also quite curious birds that, more than once, have given me the feeling that I am the one being observed while watching their antics.

The Blue-gray Gnatcatcher builds an exquisite and compact nest using such materials as spider silk and lichens. I have found many nests over the years by listening for the scolding notes of the parents which, even near their nest, have not learned the virtues of silence.

The Blue-gray Gnatcatcher is one of the birds that, in my mind, truly kicks off the arrival season of many of my favorite neotropical migrants.

The most exciting observation of the week took place on April 2 when I noticed a sparrow crouched in the gravel driveway between the garage and the fish pond. When I focused my binoculars on the bird, I discovered it was a Vesper Sparrow.

Photo by Bryan Stevens
Vesper Sparrows are uncommon birds in spring and fall in the region, although they do nest on the grassy balds of Roan Mountain.

This species has visited in the past, but it has been at least two years since I have seen one. They are considered uncommon spring visitors to Northeast Tennessee. This one was foraging at the edge of the gravel driveway. It seemed quite indifferent to my presence, which allowed me to photograph it with relative ease.

According to the website, Audubon.org, this sparrow was once known as the “Bay-winged Bunting.”  The naturalist John Burroughs is credited with giving it the name of Vesper Sparrow because he thought the song sounded more melodious in the evening. Vesper refers to the sunset evening prayer service known as vespers in the Catholic Church. Vesper is the Latin word for evening, so this bird’s common name could literally be considered “Evening Sparrow.”

To share a sighting, ask a question or make a comment, it’s easy to post  on my blog at ourfinefeatheredfriends.wordpress.com. You can also reach me on Facebook at https://www.facebook.com/ahoodedwarbler or send email to ahoodedwarbler@aol.com. Please share the link to the blog with others who might be interested in the topic of birds and birding in Northeast Tennessee. Don’t forget to put out your sugar water feeders and let me know when you see your first Ruby-throated Hummingbird for spring 2014.

1 thought on “Gnatcatchers, sparrows among new arrivals in region”