Jim and Tammie Kroll emailed me about a very interesting bird observation on the Virginia Creeper Trail last month.

They saw a bald eagle along the Virginia Creeper Trail on May 14. “It was between Alvarado and Damascus,” Jim wrote in the email. We got to see it at two different locations and watched it around 15 minutes at each location.”

Photo by Jim and Tammie Kroll • This adult bald eagle was seen along the Virginia Creeper Trail.

He added that they talked to a woman who informed them that she also sees an eagle in the same area on the Creeper Trail.

The Krolls also shared a photo of the eagle. I’m always glad that to hear that observing the nation’s official bird is no longer a rare occurrence in the region. While I haven’t seen any bald eagles this year, I have observed a raptor that shares many characteristics with them.

Ospreys, also known by the common name of “fish hawk,” occur worldwide. Ospreys migrate through the region in spring and fall, making sightings more likely along some lakes and larger rivers. I see them even more often when I travel to South Carolina, where these medium-sized raptors are common along the coast and in wetlands.

Some recently published books provide insight into the lives of bald eagles and ospreys. Teena Ruark Gorrow and Craig A. Koppie are the authors of the recent book, The DC Eagle Cam Project: Mr President and First Lady. This book profiles a celebrity pair of eagles that have nested for the past few years in U.S. National Arboretum in Washington, D.C.

Front cover of a book by Teena Ruark Gorrow and Craig A. Koppie featuring photos of a nesting season in the life of a family of ospreys.

Gorrow and Koppie have also written other books together, including one offering a pictorial journey through an osprey nesting season. Titled “Inside an Osprey’s Nest,” this book provides an account of two fostered osprey chicks that receive new parents in a heartwarming, real-life account of a family of ospreys associated with the Chesapeake Conservancy Osprey Nest Cam.

During a recent interview, Gorrow shared that bald eagles and ospreys share more than a few things in common.

“The bald eagle, Haliaeetus leucocephalus, is America’s national bird and symbol,” Gorrow said. “It is a large raptor, or bird of prey, found only in North America. Also a raptor, the osprey, Pandion Haliaetus, is a large hawk found on every continent across the globe except Antarctica.”

Like the American bald eagle, Gorrow noted that ospreys experienced devastating health effects and reproductive failures from widespread human use of dangerous pesticides like DDT.

“By the 1970s, population numbers had plummeted to catastrophic levels for both eagles and ospreys,” she said. “Federal actions were put into place which imposed migratory bird protection and banned DDT. These measures, along with the work of dedicated scientists, conservationists and citizens, have helped these magnificent raptors recover.”

Gorrow said that when selecting a nest site, bald eagles and ospreys identify an area near water with a plentiful food supply and nearby trees. “With diets consisting mostly of fish, both require foraging areas rich in fishery resources,” she said.
During nesting season, ospreys and eagles are seen as competitors, even though food is abundant in the Chesapeake Bay region. “Bald eagles are opportunists and will usually pirate fish prey from osprey when given the chance,” Gorrow said.

Nesting season for eagles begins earlier than ospreys, so they have the upper hand in defending territories. “Eagle pairs in the Chesapeake Bay area usually lay eggs in mid-February, while the ospreys return from their southern wintering destinations around mid-March,” Gorrow said. “Ospreys generally build nests in March or April and lay eggs soon after.”

Early naturalist and artist John James Audubon painted this work of art featuring an osprey with a fish held in its talons.

A more in-depth glance into the lives of ospreys is available in the book “Inside an Osprey’s Nest,” which retails for $24.99. When purchased through the Chesapeake Conservancy at http://www.chesapeakeconservancy.org, $10 from every purchase supports conservation programs along the Chesapeake Bay Watershed. The book is also available at http://www.schifferbooks.com, Amazon.com and other booksellers.

To learn more about birds and other topics from the natural world, friend him on Facebook at https://www.facebook.com/ahoodedwarbler. He is always posting about local birds, wildlife, flowers, insects and much more. 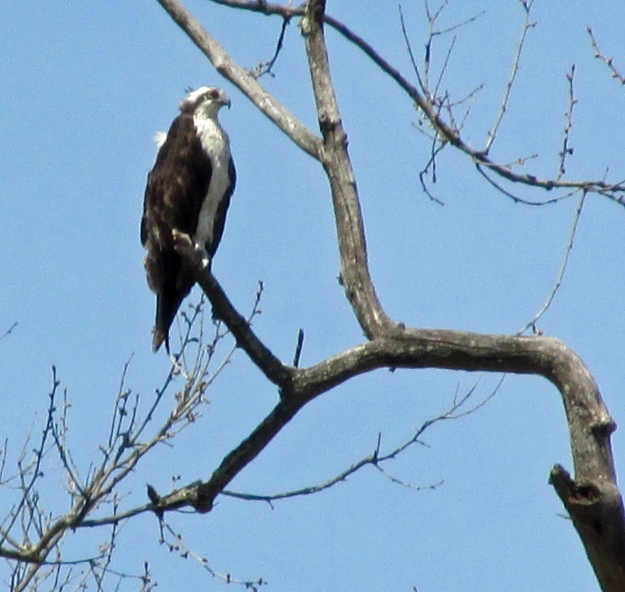 Photo by Bryan Stevens • An osprey perches in a tree along the Watauga River in Elizabethton, Tennessee.