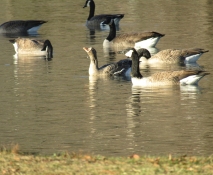 Pattie Rowland contacted me on Facebook recently with a valid concern, especially now that the temperatures are turning a little cooler. People with good intentions often visit parks to feed the ducks and geese that reside at ponds and creeks.

“I see people with bags of bread thinking they are helping the ducks and geese,” she explained.

Despite the good intentions, Pattie, a resident of Erwin, Tennessee, has some concerns about the practice and requested that I help raise awareness about the possible unintended consequences.

While I’m not an expert, I applaud her attempt to raise the issue about what foods are nutritional and which are not when it comes to feeding wild or domesticated waterfowl. So, I did some research into the topic.

Dave McRuer, the director of Wildlife Medicine at the Wildlife Center of Virginia, wrote about the risks associated with feeding waterfowl in a 2015 article on the center’s website.

McRuer noted that wild ducks and geese feed on a variety of natural foods, such as wild grains and grasses, aquatic plants, and invertebrates. This varied diet provides the essentials waterfowl need to thrive.

Photo by Bryan Stevens • Mallard drakes share a log during a period of relaxation. Mallards, Canada Geese, and some other waterfowl have voluntarily semi-domesticated themselves in exchange for an easy, but not always healthy, life based on human handouts.

On the other hand, McRuer warned about some of the foods commonly fed to waterfowl in public parks, such as bread, popcorn and corn, are typically low in protein and essential nutrients and minerals. Waterfowl feeding heavily on such fare are at risk for developing nutritional disorders.

His ultimate conclusion was that any benefits are far outweighed by risks when it comes to the feeding of waterfowl at public parks. His recommendation was to stop all forms of supplemental feeding.

He based his recommendation on more than nutritional concerns. Supplemental feeding can also lead to overcrowding, disease concerns, habitat degradation, and an unhealthy habituation to humans or animals associated with humans.

There are some alternatives to the quitting “cold turkey” option when it comes to feeding ducks and geese. Melissa Mayntz, a birder with more than 30 years of experience, penned an article for the website, The Spruce, recommending some foods that will not expose waterfowl to potential harm.

In an article titled “What to Feed Ducks,” Mayntz wrote that it is important to realize that waterfowl are capable of fending for themselves and do not require human handouts to survive, no matter what the season nor how much they seem to beg for treats. She did offer some tips on choosing nutritious treats to supplement the wild diet of park waterfowl.

Various grains, such as cracked corn, wheat, barley, oats, and rice can safely be offered as an occasional treat. In addition, she recommended grapes (sliced in half), chopped lettuce or other greens and vegetable trimmings or peels chopped into small, easily eaten pieces.

Photo by Bryan Stevens • A Mallard drake still shows some caution toward humans, arguing that this individual has not become dependent on human handouts.

Mayntz’s article basically echoes many of the warnings from the one by McRuer. Some of the foods commonly offered, such as bread, crackers, cereal and popcorn, offer very little nutritional value. In addition, bread and other similar foods are dangerous if they are moldy. Increasing the disk is the fact that any excess bread that isn’t eaten can quickly mold. Molded food can kill waterfowl, which is the last thing people would want to happen to these birds.

I agree with Mayntz in her conclusion, which admits that feeding waterfowl at local ponds and parks can be a fun experience in wildlife viewing for people of all ages. By avoiding potentially dangerous foods and restricting treats to items that actually provide nutritional value, birders can continue to enjoy this pastime without risking the lives of the birds they love so much.

As a general rule, I don’t feed the waterfowl at local parks. Many years ago I fed a flock of semi-domesticated mallards that took up residence at my fish pond. From a half dozen birds, the flock eventually grew to about two dozen ducks. The only food I fed them was cracked corn during the winter season. They foraged quite successfully for the rest of their food from the pond, the nearby creek and the fields. I’m convinced they helped control the numbers of pest insects during their stay. To this day, an occasional pair of mallards will visit on cold winter days. At times, they look at me like they’re expecting a handout and I wonder if they could be descendants of some of those mallards from the original flock.

Photo by Bryan Stevens • In some areas, Canada Geese have become so prevalent that they are considered pests. Human handouts to waterfowl are not always compatible with good health for the birds that receive them.

So, don’t let good intentions cause problems for any of our feathered friends. If you want to feed ducks at the local park, consider the healthy alternatives instead of providing bread. After all, people cannot live on bread alone, and neither can ducks.

The Lee and Lois Herndon Chapter of Tennessee Ornithological Society produces an annual calendar featuring some exceptional bird photography from its members. This year’s calendar features full-color photographs of some colorful and engaging birds. The club sells the calendars for $15 each. All proceeds are used to support birding opportunities and bird-related causes. For instance, the club pays for bird seed to stock the feeders at Sycamore Shoals State Historic Park in Elizabethton, Tennessee. The club also regularly supports causes that benefit birds. 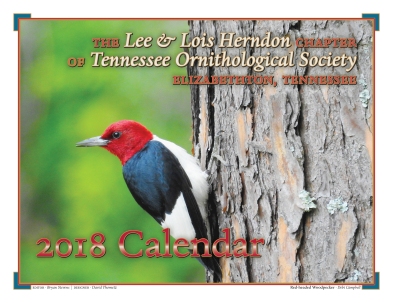 The calendar also features an informative calendar grid with highlights for major holidays, as well as important bird-related dates. The calendar’s pages feature more than 80 full-color photographs of area birds, including common favorites, as well as a few more exotic birds. The front cover features a dazzling photograph of a red-headed woodpecker. The photo was taken by Debi Campbell, a resident of Bluff City, Tennessee, and current president of the Herndon chapter. If you’re interested in obtaining a calendar, contact ahoodedwarbler@aol.com by email. Calendars will also be available for purchase by cash or check only at the offices of the Bristol Herald Courier located at 320 Bob Morrison Blvd. in Bristol, Virginia.

If you’re interested in obtaining a calendar, contact ahoodedwarbler@aol.com by email. Calendars will also be available for purchase by cash or check only at the offices of the Bristol Herald Courier located at 320 Bob Morrison Blvd. in Bristol, Virginia.