Photo by Jeana Chapman • A male scarlet tanager forages close to the ground, which is not typical behavior for these birds. Tanagers, although brightly colored, spend most of their time in the tree canopy obscured from view.

I received an email from Lewis and Jeana Chapman detailing a dazzling discovery they made.

The couple have been adding a few new birds to their bird list and decided to give me an update on what they’ve been seeing. The Chapmans reside in the community of Laurel Bloomery in Johnson County, Tennessee. The wooded slopes of Pond Mountain where they make their home provide an attractive location for migrating birds, as well a summer residents.

“The tree swallows returned this spring to nest in our bluebird box,” Lewis wrote in his email reporting his new sightings. “The great crested flycatcher has moved its nest from the front porch to the barn. Last year the flycatchers raised five chicks on the front porch. The nest got so full the chicks were perched around the edge.”

Some new additions to their list have included golden-crowned kinglet and the Northern flicker. “Most recently we spotted a scarlet tanager,” Lewis continued.

Photo Courtesy of Jean Potter A male scarlet tanager brightens shadowy woodlands with a flash of tropical colors yet remains mostly inconspicuous in the forest canopy.

They had never seen a scarlet tanager at their home. Over the years I have heard from other readers left stunned by the tropical beauty of the male scarlet tanager. That description would not be that far off. While the scarlet tanager resides in the United States and Canada from April to October each year, this bird spends the rest of the year in South America. Citizens of the United States and Canada get the better part of the bargain when it comes to hosting this bird. After the summer nesting season, male scarlet tanagers lose their brilliant red plumage and look more like the greenish females. By the time they get back to the tropics for the winter, this striking bird has transformed into a rather drab specimen.

I’ve written in previous columns about the scarlet tanager, which is one of those birds that always takes an observer’s breath away upon first seeing it. Of course, it’s the male scarlet tanager that bewitches observers with his dazzling feathers of vivid red and jet black. Female and immature tanagers are a dull olive-yellow in coloration with dark wings and tails. 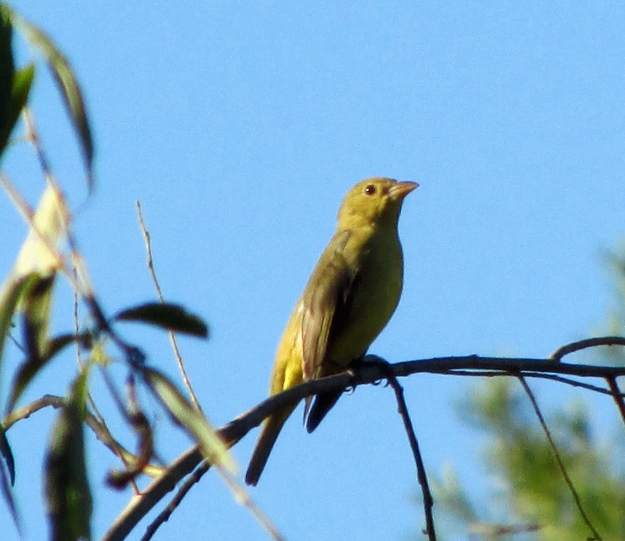 A female scarlet tanager is a study in contrast from her mate with her dull greenish-yellow plumage being much less vibrant than the male’s bright red and black feathers.

During their summer stay in the region, scarlet tanagers largely prey on insects. Although renowned as a fruit-eating bird, the scarlet tanager primarily feeds on fruit during its migration flights and on its wintering range in the tropics. This tanager breeds in deciduous and mixed deciduous-evergreen woodlands across the eastern half of North America. I’ve often heard that oaks are a favorite tree for this woodland dweller.

It’s unlikely that you’ll run across the nest of a scarlet tanager. These birds nest high in trees, often locating their nests 50 feet or more above the ground. After building a nest, a female tanager will incubate her three to five eggs for about two weeks. It’s during this time that her inconspicuous appearance is a plus, helping her blend well with her surroundings. After the young hatch, the parents are kept busy feeding the nestlings for another 10 to 15 days.

The website All About Birds notes that the population of scarlet tanagers has declined in the last half-century. Between 1966 and 2014, according to the North American Breeding Bird Survey, scarlet tanager numbers declined by 14 percent. The environmental organization Partners in Flight estimates a global breeding population of 2.2 million, with 93 percent of these birds spending some part of the year in the United States and the other seven percent breeding in Canada. These birds do poorly in forests that have been harvested for lumber. Other causes of habitat fragmentation probably also affect the well-being of scarlet tanagers. It’s worth keeping an eye out for any other signs of decline in this beautiful birds.

The scarlet tanager is a fairly common songbird during the summer months, but it also has a less common relative that can be found in northeast Tennessee, southwest Virginia and western North Carolina. The male summer tanager is the only entirely red bird found in North America. Lacking the scarlet tanager’s black wings, the summer tanager’s red feathers are also of a rosier hue.

Photo Courtesy of Jean Potter The Summer Tanager is the only all-red bird in North America. It is less common in Northeast Tennessee than the related Scarlet Tanager.

While I have seen summer tanagers in Tennessee on occasion, most recently at Steele Creek Park in Bristol, Tennessee, I saw my first summer tanager during a spring trip to South Carolina many years ago. Overall, the summer tanager has more of a southern stronghold than the scarlet tanager, as the summer tanager’s range also extends into the southwestern United States.

Both of these tanagers are birds fond of dense, undisturbed woodlands. Most of the time, unfortunately, these tanagers reside in the dense woodland canopy. They’re more often heard than seen, producing a song similar to an American robin’s, but usually described as somewhat more raspy. The apt description I like for these two tanagers is that their songs sound like one sung by a hoarse robin with a sore throat.

The tanager wasn’t the only unexpected feathered visitor to the Chapman home this spring. The same week the tanager made its appearance, a male hooded warbler also visited with the Chapmans. “This we found ironic because of your email address,” Lewis wrote. For readers who may not have noticed, my email address is ahoodedwarbler@aol.com. I’ve used this email address for many years to celebrate one of my favorite birds.

The Chapmans also provided me with photos of all their colorful birds. In subsequent emails, they also informed me of some other unusual visitors. “One of our strangest visitors was an albino American goldfinch,” Lewis also revealed in his email. “Over this past weekend, we had rose-breasted grosbeak and indigo bunting show up.”

Many of these birds — the rose-breasted grosbeak, the scarlet tanager, the indigo bunting — always wow observers experiencing their first observation of them. Our two native tanagers — scarlet and summer — are definitely two memorable birds for anyone who has had the pleasure of seeing one. It’s a great time of year to get outdoors and keep your eyes open for a splash of bright color. You never know what you may see when you lift your binoculars.

2 thoughts on “Male scarlet tanager stands out from other birds”