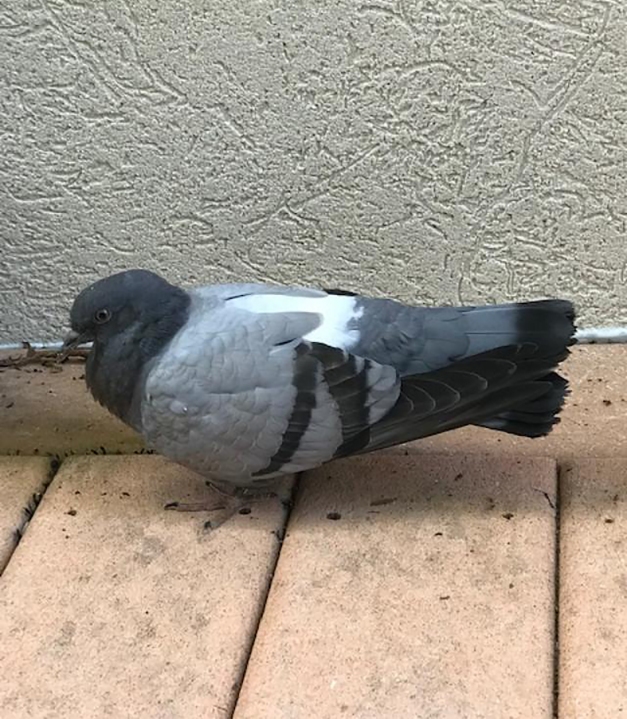 Photo by Karen McSharry • This rock pigeon made a recent visit to a home in Bristol, Virginia. Not native to North America, the pigeon has been here almost since the first Europeans arrived on the continent.

Karen McSharry, a resident of Bristol, Tennessee, emailed me recently with some photos asking for help in determining an identification of the bird depicted in her photos.

“This fellow made a sharp descent and landed on my deck with a thud,” Karen wrote. “He just stood there, seemed stunned and didn’t move or make a sound.”

After an hour or so, her husband picked the bird up and set him in the wooded area behind their house.

“He doesn’t seem to be there now, over a week later,” she added.

Karen said that at first glance pigeon came to mind as she tried to identify her visiting feathered friend. “But his head is bigger and black,” she wrote. “There didn’t seem to be any iridescence.” 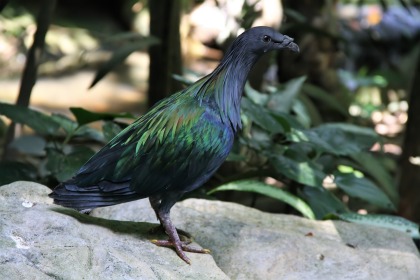 Photo by Pixabay.com • The Nicobar pigeon (Caloenas nicobarica) is a striking wild pigeon in appearance that is found on small islands and in coastal regions from the Andaman and Nicobar Islands, India, east through the Malay Archipelago, to the Solomons and Palau.

I wrote back and told Karen to trust her instincts. The bird she photographed was indeed a pigeon, known more formally as rock pigeon.

Once also known as rock doves, this pigeon is not native to North America, but the species has been here almost from the time the first Europeans began to sail to the shores of what eventually became the United States and Canada. The rock pigeon is native to Europe, Africa and parts of Asia, but the species has long been domesticated. Pigeons display a lot of variety in their appearance. Through artificial selection, the rock pigeon has been bred into all sorts of other patterns and colors beyond the wild bird’s standard appearance.

I don’t usually get pigeons at my home, although I did once have a domesticated bird visit my feeders for a few days. This particular bird had a band on one leg. I found out later it was a “homing” pigeon, which are pigeons trained to carry messages. After they deliver their message, they return “home,” hence the term “homing pigeon.” But they are still basically just a domesticated variety of rock pigeon.

Gordon Randall Smith, a resident of Saltville, Virginia, might be one of the region’s foremost authorities on pigeons. Eighty-one years old, he has bred pigeons for the past 76 years. He’s also raised game chickens and described his place as once being “like a zoo.” 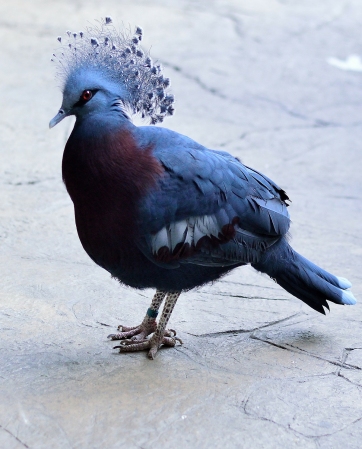 Photo by Pixabay.com • The Victoria crowned pigeon (Goura victoria) is a large, bluish-grey pigeon with elegant blue lace-like crests, maroon breast, and red irises. A wild bird, this pigeon shows that nature is just as inventive as humans at giving some birds unusual and outlandish appearances.

After consideration, he identified the Bohemian fairy swallow as his favorite variety of pigeon, followed by Chinese owls, crested helmets and Budapest muffed stork tumblers, as well as Lahore and Indian ribbon tailed fantails.

An uncle, Landon Smith, introduced him to the love for the propagation of a variety of domestic pigeons. “I’ve been a fancier, breeder and vivid admirer of birds throughout my amazing and very fruitful life on this planet earth,” Gordon wrote in a letter.

“I was introduced to a covey of ringneck mourning doves and pigeons at uncle Landon Smith’s passing,” Gordon noted. He described his uncle as a very dedicated person who kept various birds, animals and even exotic creatures of nature.

I looked up some of these whimsical names online. Although the basic pigeon stock is apparent in their makeup, these fanciful breeds truly show how enthusiastically the rock pigeon has embraced domestication.

In the wild, rock pigeons display an affinity for nesting and roosting on cliffs and rock ledges, hence the bird’s common name. Feral pigeons in large cities like New York have merely substituted high rises and skysrcapers for craggy cliffs.

Pigeons and doves constitute the avian family Columbidae and the order Columbiformes, which includes about 42 genera and 310 species. North America is home to several native doves, including the mourning dove, Inca dove, common ground dove, ruddy ground dove and white-winged dove. The latter was made famous in a refrain in the song “Edge of Seventeen” by Stevie Nicks. The now-extinct dodo was arguably the most famous member of the diverse family that includes pigeons and doves.