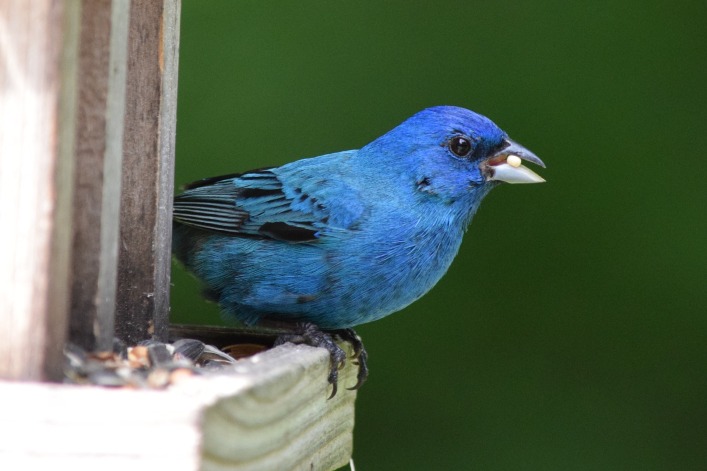 Photo by HeronWorks/Pixabay.com • An indigo bunting feeds on millet seeds at a backyard feeder. These dazzling blue birds are a common summer visitors in Northeast Tennessee.

It’s been a wet summer so far, and a verdant hue has been the rule as trees and other plants seem to be thriving. The green canopy of trees around my home offers concealment for hidden singers, including red-eyed vireos, wood thrushes, and indigo buntings. Those last ones have been a source of some frustration. I have heard a male indigo bunting singing persistently on a daily basis all last month, but glimpsing him in the green foliage has been a challenge.

Two recent summer bird counts have also emphasized some of the more commonplace birds in the region. While American robins and European starlings were extremely abundant, these two birds are permanent residents and are present year-round. A few other summer songbirds also helped swell the ranks of some of the seasonally common birds. For instance, the Unicoi County Summer Bird Count found a total of 131 indigo buntings, while the Carter County Summer Bird Count tallied 105 of these little blue beauties. Both of these Northeast Tennessee surveys are conducted by members of the Lee and Lois Herndon Chapter of Tennessee Ornithological Society.

Photo by Bryan Stevens • Neotropical migrants, such as this indigo bunting, provide some vibrant color during the hot summer months.

Buntings like to reside in the boundary region where forests and woodlands meet fields and pastures. Personally, the indigo bunting has always been a bird that is suggestive of the long, hot days of summer. One of my earliest and still quite vivid birding memories is a recollection of a shockingly blue bird and a stunning yellow and black bird sharing perches atop a blue spruce tree in my yard. Several decades later, the tree is no longer standing, but these beautiful birds — I now know these summer visitors were indigo buntings and American goldfinches — return year after year to my yard and gardens.

These birds usually arrive in the region in late April and I’ve seen them in late October, although most indigo buntings have left the region by late September. Male indigo buntings are persistent singers, and in the past couple of weeks one very enthusiastic male has been singing even during the hottest hours of recent July afternoons. The preference of this small songbird is to sing from the tops of tall trees. They are often concealed by the green leaves. When I do get a glimpse of the obscured songster, often all I see is a dark shape silhouetted against the bright sky. Sometimes, if he plunges from the upper branches into the woodland understory, I get that telltale glimpse of blue feathers.

The indigo bunting is the only solid blue bird in the eastern United States. It’s all an illusion, however. The indigo bunting’s feathers are not really blue; the male’s brilliant azure plumage is caused by the process of refraction. This process absorbs all but blue light, which explains why the indigo bunting appears blue. In bright light, it can even look unnaturally vivid blue. In poor light, however, an indigo bunting male can appear black. Fortunately, indigo buntings have both a characteristic body shape and song, so even if the birds are not seen at their best, they can still be recognized.

Like many species of songbirds, the male is by far the most colorful. In this instance, the male is also responsible for the species’ name. Indigo is a blue dye that was once an important crop in the South. The drab female may boast some blue highlights in her plumage. Juvenile birds just out of the nest also resemble the female. Pay close attention to any indigo buntings you observe as summer progresses. Juvenile birds will look mostly brown with just a hint of blue in the wings and the tail. These will be the young buntings that were hatched this spring and early summer. They will often accompany their parents to feeders, where they are extremely fond of millet seed. I like to have some feeders stocked with millet when the buntings begin to return each spring. They will also feed on thistle and sunflower seeds. Away from our feeders, they also devour plenty of seeds from various noxious weeds. Because of the indigo bunting’s appetite for the seeds of destructive weeds, it is considered a very beneficial bird. Tangible value and exceptional beauty — that’s not a bad combination for such a tiny bird. 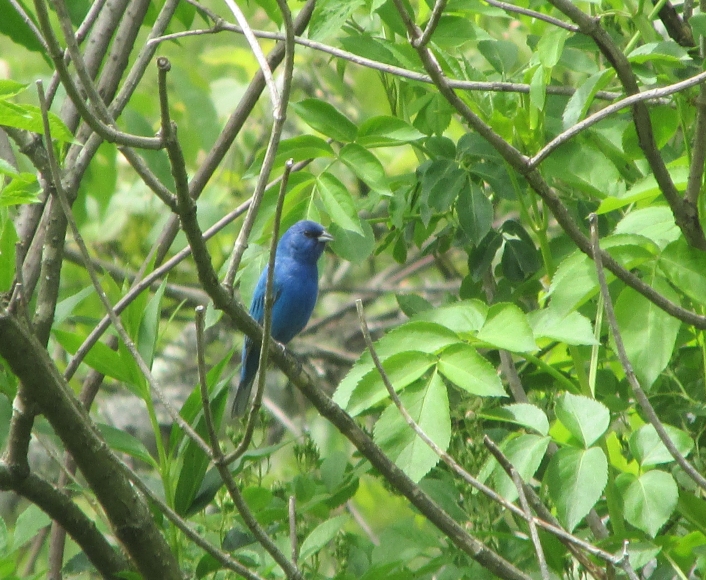 Photo by Bryan Stevens • Although bright blue, a male indigo bunting will often blend with its surroundings.