Photo by reitz27/Pixabay.com • While one of the smaller falcons, the American kestrel is also one of the this family of raptors more colorful members.

I enjoyed a drive through Limestone Cove in Unicoi, Tennessee, on the afternoon of the next-to-the-last day of 2020. In addition to finding a total of 13 Eastern bluebirds, I saw an American kestrel perched on utility lines near Bell Cemetery. The sighting was the first I’ve had of a kestrel so far during the 2020-21 winter season. Over the years, the cemetery and adjacent fields have been a reliable location for finding this small falcon during the winter.

The American kestrel, although present throughout the year in the region, is somewhat more prominent during the winter months when kestrels from farther north migrate into the region. However, this falcon also nests in the region and can be found at any time of the year in suitable habitat, which is usually open countryside.

The American kestrel is a small member of the falcon family, which includes such relatives as merlin, peregrine falcon and gyrfalcon. All falcons, regardless of size, share a similar aerodynamic design that includes sleek, streamlined bodies and long, slim wings which taper to pointed tips. They fly with rapid wingbeats and are capable of swift flight.

Photo by PBarlowArt/Pixabay.com • An American kestrel uses a rock outcrop as a convenient perch.

The male American kestrel is a colorful bird. He shows a rusty back with some black barring, a rusty tail and steel blue-gray wings. The female kestrel is brownish with black barring on her back and tail. She also shows a buff-colored wash streaked with brown on her under- parts. Both sexes show a strong facial pattern marked by two black “sideburns” on the side of the face.

The American kestrel has long been one of my favorite raptors. They’re seldom as skittish as many other raptors and will permit close observation. Formerly known by the name “Sparrow Hawk,” the American kestrel does not feed entirely on other birds. In fact, a large part of this small falcon’s diet includes rodents and insects.

In its nesting preference, the American kestrel is unusual among other native falcons and hawks. Kestrels nest in cavities, including abandoned woodpecker holes and nest boxes provided by humans. 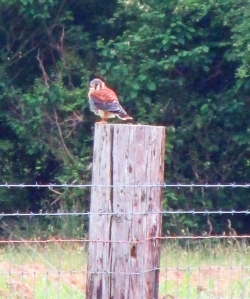 Like many raptors, the American kestrel likes to hunt from a perch, swooping down on unsuspecting prey. The kestrel, however, is also capable of hovering, a type of flight that only a relatively few birds, including the belted kingfisher and the ruby-throated hummingbird, are capable of performing.

The falcons comprise a family of birds with a long history with humans. The sport of falconry, although not as widely practiced today, long ago became associated with royalty and nobility. In fact, falconry has been called “the sport of kings.” The sport basically involved hunting prey, usually other birds, with birds of prey such as falcons. As a pastime, falconry never became as popular in the United States as in other parts of the world.

There are more than 60 species of falcons found worldwide. While the peregrine falcon’s endangered status became well-known in the United States, other falcons have been threatened with extinction. The Mauritius Kestrel once dwindled to a population of only six individuals. Today, the population, due to intensive human effort, has greatly recovered.

Other members of the falcon family can be found in the region, including the peregrine falcon and the merlin. Other falcons in North America include the prairie falcon and the Aplomado falcon. Worldwide, some of the more descriptively named falcons include spotted kestrel, rock kestrel, greater kestrel, lesser kestrel, red-footed falcon, red-necked falcon, sooty falcon and brown falcon. 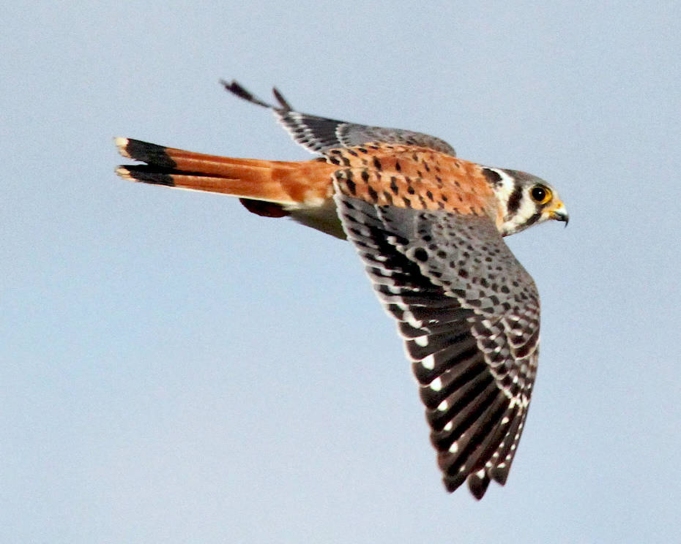 I took part in a Christmas Bird Count last month. These annual mid-December surveys of bird populations are not quite as exciting as counts held during the spring or fall migration periods each year, but they can produce some interesting results. One exciting post-count activity after taking part in a CBC is getting together to compile the results tallied by the various participating groups and individuals. The results are usually compiled on field checklists for birds of Tennessee. These checklists, which are produced by the Tennessee Wildlife Resources Agency and the Tennessee Ornithological Society, feature a listing of the common name of every bird species likely to be encountered in the state.

The compiler generally reads out the various names on the checklist, which lists all the local birds, beginning with black-bellied whistling duck and ending with house sparrow, and the spokespersons for the various parties respond as each bird’s name is called with the number of birds seen for each species. Over the years, some of the common names of birds featured on the list have changed, as has the position on the list for some of the species. For instance, the American kestrel and other falcons are no longer listed on the card in a grouping with the other raptors found in the state. This doesn’t make much sense to me. But, as I understand it, the falcons have been re-classified for scientific reasons, changing their relationship with the other birds listed on the checklists.

At least no expert has suggested a name change for any of the falcons. I dislike name changes, especially when we lose a descriptive name for a mundane one. That’s how we got relatively bland names like Eastern towhee instead of rufous-sided towhee and Northern flicker in place of yellow-shafted flicker. In fact, the American kestrel was once known as the sparrow hawk. The merlin and peregrine falcon, larger relatives of the kestrel, were once known as the pigeon hawk and duck hawk, respectively.

Common names are also known as “vernacular” names. Vernacular can be defined as the language or dialect spoken by the ordinary people, which contrasts with the scientific names for species of birds that are usually only recognized by ornithologists or other experts. However, just like dialects, there can be a great deal of variety among common names for the same birds. Many of the common names for some of our favorite birds lack any vivid descriptiveness. 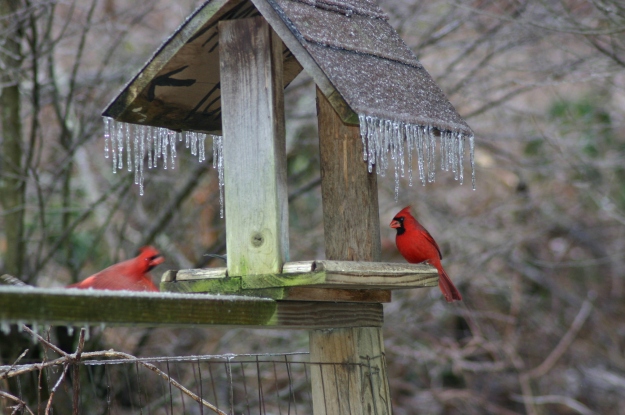 Photo by Bryan Stevens • Northern cardinal seems much less descriptive of this popular bird than such common names as Virginia nightingale and cardinal grosbeak.

For instance, let’s take a look at the Northern cardinal, which has been known by such common names as cardinal bird, cardinal grosbeak, crested redbird, Kentucky cardinal, redbird, Virginia redbird and Virginia nightingale. The first thing that irritates me about the common name of this bird is that there is no Southern cardinal. So, why is this bird the “Northern” cardinal? The only other birds in the Cardinalis genus are the desert cardinal, also known as the pyrrhuloxia, and the vermilion cardinal. Both these relatives have arguably more interesting and descriptive names than their relative, which is a favorite of many birders and arguably better known to many people.

I can understand why Kentucky cardinal and Virginia redbird are not inclusive names since the Northern cardinal ranges far beyond the borders of these two states. On the other hand, cardinal grosbeak with its reference to the cardinal’s large beak, as well as crested redbird, are both more descriptive and creative than the rather nondescript Northern cardinal.

Of course, a literary great summed up the confusing attitude toward common names. “What’s in a name?” William Shakespeare had Juliet ponder. “That which we call a rose by any other name would smell as sweet.”

I think The Bard was on to something. Whether we call a cardinal a redbird or a Virginia nightingale, it’s song will sound as sweet to our ears. The appearance of one of these birds on a gloomy day will elevate our mood whether we know the bird as cardinal grosbeak, Kentucky cardinal or, in scientific terminology, Cardinalis cardinalis.

As promised, here’s an update on the hummingbirds that proved dutiful daily visitors to a sugar water feeder at the Bristol home of Ralph Beamer through Halloween, Thanksgiving and Christmas.

Early in the new year, Ralph notified me that the hummingbirds departed ahead of 2018’s arrival.

“We had a surprise on New Year’s Day,” Ralph wrote in an email. “The hummingbirds were gone. I am glad they left ahead of the extreme cold we have had the last few days.”

Ralph noted that he had a wonderful time watching them for the past three months. He is hopeful they will come back in the future, but figured that is probably wishful thinking.

Actually, some of these winter hummingbirds, which often turn out to be rufous hummingbirds, have proven quite faithful to favorite locations. Bird banders have recaptured some individual hummingbirds year after year in the same yards. During the stay of his visitors, Ralph shared photographs and videos with me of their visits to his feeders. I enjoyed receiving his periodic updates about them.

I emailed Ralph back and told him that these hummingbirds seem to also have a knack for knowing when to leave and suggested he keep an eye out for them again next fall.

Bryan Stevens lives near Roan Mountain, Tennessee. To learn more about birds and other topics from the natural world, friend Stevens on Facebook at https://www.facebook.com/ahoodedwarbler. If you have a question, wish to make a comment or share a sighting, email ahoodedwarbler@aol.com.