Photo by Bryan Stevens • A hermit thrush perched on a fence rail shows the reddish tail, a reliable field mark to separate this species from close relatives. The tail contrasts from the rest of the bird’s plumage.

To answer her question, I replied and informed her that the thrush is a winter visitor. The hermit thrush takes up residence after its kin have already departed the region in the fall, making it one of the few thrushes to remain in Northeast Tennessee during the winter months. I’ve always thought a good nickname for this bird would be the “winter thrush” because of its presence during the colder months of the year. Of course, for those who know where to look, a few hermit thrushes spend the summer nesting season at high elevation peaks such as Roan Mountain on the Tennessee and North Carolina border.

The hermit thrush is one of the larger brown thrushes, which also includes such related birds as Swainson’s thrush, veery, gray-cheeked thrush and wood thrush. Other less closely related members of the thrush family include the American robin, Eastern bluebird and Townsend’s solitaire.

USFWS • Hermit thrushes like to keep to the shadows.

The poet Walt Whitman employed a hermit thrush as a symbol in his poem, “When Lilacs Last in the Dooryard Bloom’d,” a moving pastoral elegy in honor of the assassinated President Abraham Lincoln. Whitman evidently knew his birds, and it’s not difficult for naturalists and bird enthusiasts to identify that he referred to the hermit thrush when he wove this songbird as a symbol into his stanzas honoring Lincoln. “Sing on there in the swamp,” Whitman wrote in his poem. “O singer bashful and tender, I hear your notes, I hear your call. I hear, I come presently, I understand you…”

Whitman evidently knew of this bird’s bashful, retiring habits, and he had obviously enjoyed the flute-like notes of the hermit thrush’s call. Whitman and many other Americans have been made fans of this gifted songbird. In fact, the citizens of Vermont even proclaimed the hermit thrush as their official state bird. The hermit thrush is well known for its song — a series of clear, musical notes, each on a different pitch, consisting of a piping introductory note and a reedy tremolo. The song had often been described as melancholy by various bird experts. The birds don’t usually sing in winter, but they do produce a call note when disturbed or alarmed that is described as a low “chuck.”

The visiting hermit thrush at her home has allowed Karen Miller to get to know this somewhat reclusive bird better. “He sits on the ground, cocks his head, spies a berry and then jumps up and gets it,” she wrote. She noted that her visitor has a good appetite. “He eats four or five at a time,” she said. “I’m so glad to see him.” 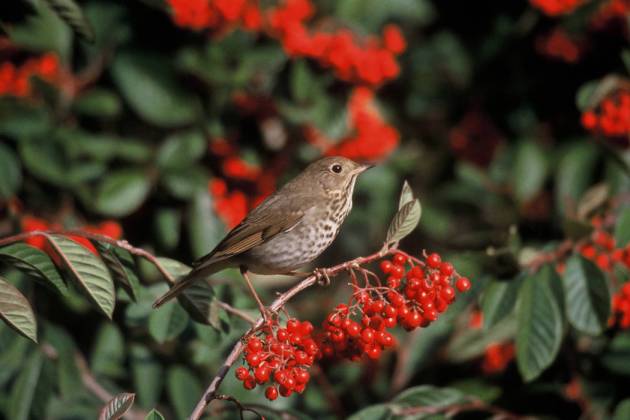 Photo by USFWS • Like many thrushes, the hermit thrush is fond of fruit and berries, especially during the winter.

According to the Smoky Mountains Visitors Guide website, the hermit thrush forages for most of its food from the ground. This bird’s diet includes insects, spiders, snails, and earthworms, plus considerable amounts of wild fruits during the fall and winter. Hermit thrushes may join up with mixed flocks of birds during the winter, often associating with such songbirds as kinglets, brown creepers, chickadees and titmice. For those not fortunate enough to host a wintering hermit thrush, this bird can be found during the summer months atop some high-elevation peaks. Close to home, look for this thrush in the Roan Mountain Rhododendron Gardens. The hermit thrush is also found at some locations in the Great Smoky Mountain National Park.

Female hermit thrushes collect nesting materials and construct the nest, within which she will lay three to six eggs. These thrushes nest once or twice a season. According to the website All About Birds, nesting habits differ between hermit thrushes in the western North America and their counterparts in the eastern half of the continent. Eastern thrushes tend to nest on the ground, but those in the west often place their nests in shrubs or tree branches.

At home on Simerly Creek Road, my first hermit thrush of the winter arrived in early November of last year. During a woodland stroll with neighbor Beth McPherson, the resident thrush put on an impressive show, hopping and scraping on the woodland floor beneath a rhododendron thicket bordering a mountain spring. In such surroundings, it’s not difficult to fathom why this bird has developed such a subtle plumage of muted browns and grays. Even when foraging actively, the bird blended remarkably with the background of fallen leaves and other woodland debris.

Photo by Bryan Stevens • A hermit thrush perches on a branch in a winter woodland.

The wintering hermit thrushes in the region will likely stay put for the next couple of months, but they will mostly depart the area in April or early May. If you want to look for them, now’s the time.

••••• Bryan Stevens lives near Roan Mountain, Tennessee. To learn more about birds and other topics from the natural world, friend Stevens on Facebook at https://www.facebook.com/ahoodedwarbler. He is always posting about local birds, wildlife, flowers, insects and much more. If you have a question, wish to make a comment or share a sighting, email ahoodedwarbler@aol.com.