I felt certain I’d misheard when fellow birder Brookie Potter phoned me and reported a sandhill crane in the parking lot of the Food City grocery store located in south Johnson City. Plagued with a bad connection, it took a second call to clarify his remarks. “Did you say there’s a sandhill crane in the parking lot at Food City?” I asked him when I called back and established a better connection.

Photo by Bryan Stevens • The sandhill crane walks toward a flooded field behind the grocery store.

He confirmed that I’d heard correctly, which launched a quick trip to the aforementioned grocery store. I’m familiar with the store and knew that there are large fields surrounding this particular Food City and an adjacent section of stores. When I arrived, I began scanning the field. A sandhill crane is a fairly tall bird and should stick out. No luck. I called Brookie back and told him I was at the Food City but saw no sign of a crane.

“It’s here,” he said. “In the parking lot.” He gave me specific directions. Moments later I arrived in my car and saw a sandhill crane taking careful steps as it moved through the aisles of parked cars.

The crane first attracted the notice of John Neth, a resident of the Milligan College community, who notified other area birders. When I arrived I found Brookie and his wife, Jean, who had her camera and was taking photos of the crane as it ambled tamely through the parking lot.

Photo by Bryan Stevens• The sandhill crane looks more natural after retreating to a wet field behind the grocery store.

I saw my first sandhill crane in a harvested corn field in early 1999 In Shady Valley, Tennessee. Since that first sighting, I have observed sandhill cranes near Musick’s Campground at Holston Lake in Bristol, Tennessee, as well as along the Tennessee River in Knoxville. I also saw dozens of these majestic birds during a trip to Utah in the spring of 2006. I’ve also seen sandhill cranes in Florida. Many of the cranes living in the Sunshine State are quite tame, ranging into private yards and onto airport tarmacs. My theory is that the bird at the Food City is a Florida visitor based on its trusting nature toward humans and its level of comfort in the artificial environment of an asphalt parking lot.

A sandhill crane stands over four feet tall, with a wingspan stretching more than six feet, making it one of the largest birds found in Tennessee. Every winter, thousands of sandhill cranes migrate to the 6,000-acre Hiwassee Wildlife Refuge located on Chickamauga Lake at the confluence of the Hiwassee River with the Tennessee River. In the more mountainous areas of northeast Tennessee, western North Carolina and southwest Virginia, sightings of these cranes are considerably more rare.

In December 2011 and January 2012, a hooded crane made headlines by appearing with the sandhill cranes gathered at Hiwassee. Hooded cranes normally winter in southern Japan, as well as locations in South Korea and China. On occasion, endangered whooping cranes have also mingled with the large flocks of sandhill cranes at Hiwassee.

My observations of a whooping crane are confined to a single occasion about 20 years ago when a migrating individual made a brief stop at a field in Greene County. The whooping crane is a continuing success story for the Endangered Species Act. A March 2018 Fish and Wildlife Service report estimates that the total current population of whooping cranes is about 800 individuals, which is a dramatic increase from the low point for the species in 1938 when the world’s whooping cranes numbered only 15 adult birds in a single flock. 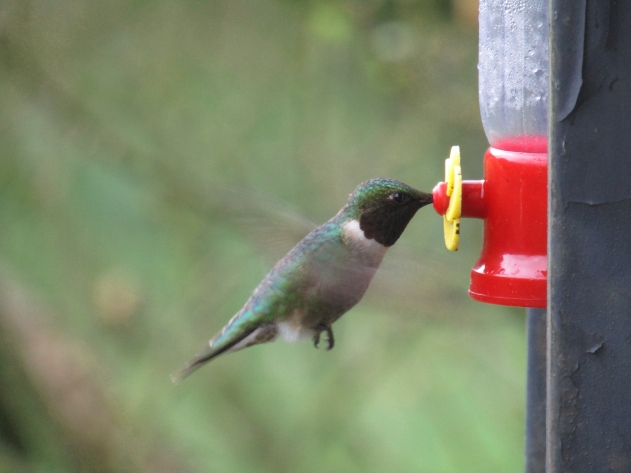 Photo by Bryan Stevens • A snapshot of the first arrival among male ruby-throated hummingbirds in 2020.

People have continued to report their first spring sightings of ruby-throated hummingbirds with me.

John Whinery reported that his first hummingbird of spring was a female ruby-throated hummingbird on the morning of April 19.  “I saw her just southwest of Fall Branch along Highway 93 a mile in Greene County,” he wrote in a Facebook post.

“Got our first sighting of a hummingbird this morning about 10:30,” Russ MacIntyre wrote in an email on Monday, April 20. “We put our feeders out on April 4 or April 5.” Russ lives on Hazelnut Drive in Jonesborough, Tennessee.

Tom McNeil in the Piney Grove community of Hampton was pleased to announce on Facebook the arrival of a hummingbird at his home. “Finally! A male arrived at 4:20 p.m. on April 20.”

Phyllis Moore shared on Facebook that she saw her first hummingbird at home in Bristol, Virginia, on the morning of April 20.

Anita Clemmer reported on Facebook that she saw her first spring hummingbird on April 22. “I got my first ruby-throated hummingbird today in Deep Gap, North Carolina,” she posted.

Felicia Mitchell, Emory, Virginia, share the news of her first sighting in a Facebook message. “First hummingbird at my feeder on April 24 at 7:10 p.m.,” she wrote.

I appreciate all the responses I received this year from people glad to welcome their hummingbirds back.

Here are a few more photos of the sandhill crane during its April visit. 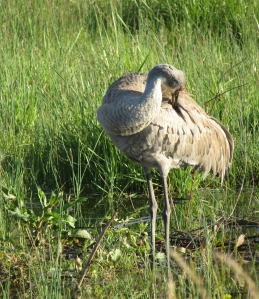