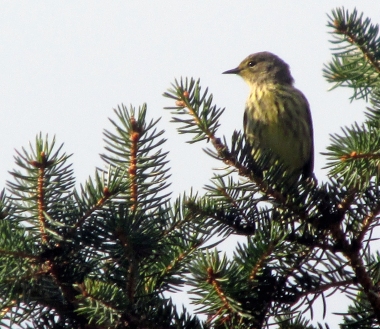 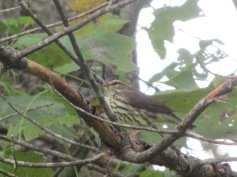 The autumn season is a great time to practice birdwatching skills. The temperatures are milder, some of the concealing leaves have dropped from the trees and many migrating birds are moving through the region. With those factors in mind, the Lee and Lois Herndon Chapter of Tennessee Ornithological Society, also known as the Elizabethton Bird Club, will conduct morning bird walks every Saturday in October at Sycamore Shoals State Historic Park in Elizabethton, Tennessee.

The walks will begin at 8 a.m. and participants are asked to meet in the parking lot in front of the park’s visitors center. The dates for this year’s walks are Oct. 7, Oct. 14, Oct. 21 and Oct. 28.

Participants are advised to bring binoculars to increase viewing enjoyment. Persons of any skill level are invited to take part in these walks along the park’s walking trails, which offer river, field and woodland habitats. Members of the Elizabethton Bird Club will happily answer questions and help new birders with identification of any birds encountered. Targeted species will include migrants such as warblers, tanagers, thrushes and flycatchers, as well as resident songbirds ranging from Northern cardinals and blue jays to Carolina chickadees and red-bellied woodpeckers.

I enjoy fall birding probably more than any other season. It’s always nice to welcome some of our favorites when they return in the spring, but autumn’s the most productive season (at least in my own experience) when it comes to seeing the greatest diversity of birds in a relatively brief period of time.
Birding in my yard during September produced sightings of several species of warblers, a family of birds that is always one of the anticipated highlights of the migration season. Migrants spotted in my yard this fall have included American redstart, Blackburnian warbler, Cape May warbler, Tennessee warbler, Northern parula, magnolia warbler, hooded warbler, black-and-white warbler, chestnut-sided warbler, black-throated blue warbler, black-throated green warbler and Northern waterthrush.

The warblers are the warmth-chasing retirees of the bird world. Like their human counterparts with summer homes in the mountains to escape the worst of summer’s scorching temperatures, warblers retreat southward every fall, spreading into the southern United States, the Caribbean, and Central and South America for the winter months.

Of course, warblers are not the only neotropical birds to employ this technique of nesting and raising young in the northern latitudes during the summer only to return south for the winter. Tanagers, vireos, flycatchers and some other families do the same, but not with the same niche-exploiting diversity of the warblers. As a family, the warblers boast 114 species. Not quite half of the species make some part of North America their summer home, which leaves the rest of the more sedentary family members living year-round in the American tropics. 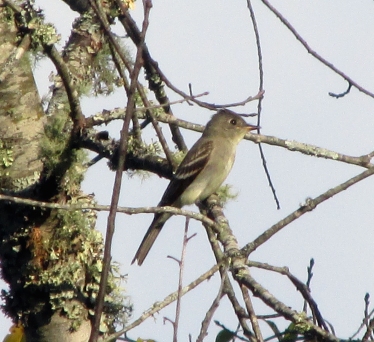 Photo by Bryan Stevens • An Eastern Wood-Pewee perches during a migration stop in the yard.

Warblers pose a worthy challenge for birders. It takes practice to chase their movements in binoculars as they flit among the upper branches of tall trees. They are, for the most part, a family of almost frantically active birds that rarely pause for long while foraging for food, which mostly consists of various insects or insect larvae. Warblers migrating through the region during the autumn season bring another challenge to the table. Many warblers wear completely different plumages in spring and fall, which requires some mental adjustments when trying to match a binoculars view of a warbler to its illustration in a field guide. Known as the “confusing fall warblers,” these tricky cases prompt some novice birders to throw up their arms in defeat. I know because I once felt like that myself. As with all worthwhile pursuits, practice makes perfect.

Come out and join me and other bird club members at one of the Saturday strolls at Sycamore Shoals State Historic Park, which is located at 1651 W. Elk Ave., Elizabethton, Tennessee. We’ll chase some warblers through the treetops. We may not identify every single one, but we’ll have a fun time in the attempt.

Bryan Stevens lives near Roan Mountain, Tennessee. To ask a question, make a comment or share a sighting, email him at ahoodedwarbler@aol.com.